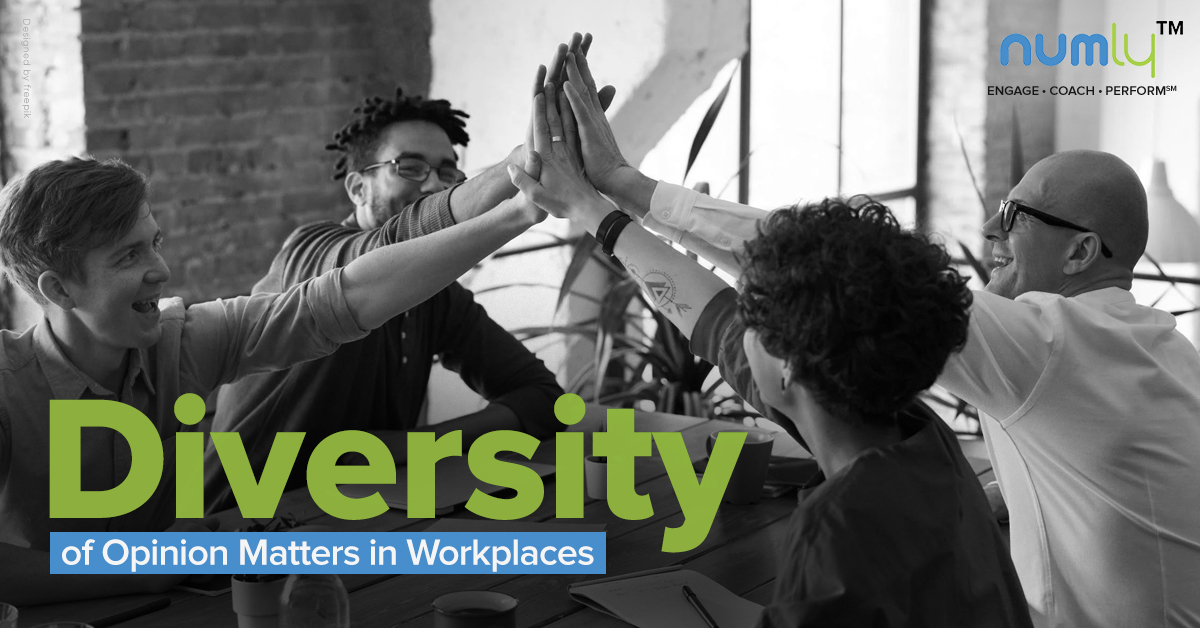 When it comes to contemporary workplace requirements, diversity is a widely expected and accepted phenomenon. Cultural, regional, ethnic, and orientation-based diversity are just a few examples of the various types of diversity at work.

Diversity of opinion, on the other hand, is a different kind of diversity that is crucial to a modern workplace.

Diversity of opinion is all about allowing and accepting various viewpoints on a topic without reservation. The benefits of having a diversity of viewpoints were highlighted in a McKinsey report, which also demonstrated how diversity directly correlates with a company’s financial performance.

Companies that don’t prioritize the diversity of viewpoints struggle to hold onto their top talent for a variety of reasons. This calls for strict laws that encourage disagreements and allow the gap between employees and employers to narrow. Now that diversity cannot, by itself, define an organization’s culture, allowing for a diversity of opinion is equally crucial.

When applied to workplaces, diversity of opinion has a very broad spectrum. Here are some examples of how it might appear:

Open-ended conversations are the heart and soul of the diversity of opinion. All a workplace can manage to provide in order to call itself a diverse and open organization is a safe space to add one’s two cents. It enables managers to unleash the full potential of their workforce and comprehend how everyone thinks in various scenarios. Gathering everyone’s opinions in a team meeting without making anyone feel like their opinion is unimportant can be one way to do this.

Every team needs criticism and feedback to improve both internally and externally, for the greater good. In a business communication model, constructive criticism can flow both upwards and downwards. Diversity of opinion can only be fully tolerated and preached if the criticism is supported by opinions that can be executed and are quantifiable.

This kind of diversity enables each team member to come out of their shell and contribute their area of expertise during a discussion or decision-making process. Many times, people are ‘quiet quitting’, where they don’t believe in providing more value or input than is necessary. The right kinds of diversity of opinion practices create an open channel that gives everyone a chance and makes the most of everyone’s knowledge and expertise.

The many benefits of Diversity of Opinion

Organizations can benefit from the diversity of opinion in many different ways. The top reasons why diversity promotes wholesome workplaces are listed below.

Diversity adds more hues to the organization’s palette and prevents it from becoming stale over time. Innovation, which is at the heart of diversity, not only helps to improve the organization’s revenue/sales funnel but also the team’s ability to solve problems through a shared unity and idea flow.

Such diversity-related initiatives set the tone for brand recognition and company culture in the marketplace. This not only solidifies the belief of potential employees but also establishes the company’s reputation as a diverse organization that values its employees.

A diverse and inclusive workplace, according to research, not only allows for quicker decisions but also results in better decisions 87% of the time. It quickly and easily shifts the focus of the conversation from being problem-driven to being solution-driven.

40% of employees were thinking of leaving their current jobs in 2022. Numerous factors may be at play, but it is never because they detested their jobs. They may not like the way they do their jobs, but they know. Their treatment and value at work are the sources of the issue. Everyone has a fantastic opportunity to demonstrate their full potential and rediscover their love for their work in an environment that values the diversity of opinions.

How to nurture diversity of opinion

Organizations frequently struggle to foster an environment that genuinely values the diversity of opinion. Some leaders and managers frequently fail to see the bigger picture, but with the right coaching, they can learn the proper concepts while unlearning the old notions.

Diversity and inclusion are frequently deeply ingrained corporate values that are upheld within an organization. An organization that values its employees and considers them to be its most valuable resource makes an effort to hear everyone’s viewpoint, regardless of any biases or preconceived notions. Because corporate culture upholds diversity of opinion, it enables leaders to adopt the mindset of unity in diversity and makes the necessary efforts to support it.

Leaders are essential to promoting diversity of thought at both the macro and micro levels. The right kind of leadership not only encourages this kind of diversity but also inspires everyone to fully embrace and follow it. With the right leaders, it is possible to encourage the team members to participate in discussions and contribute their best ideas. Everyone can accept the concept of diversity of opinion and participate fully when leaders instill confidence in the team as a whole.

Getting an organization’s leadership ready to take on such initiatives, in the long run, is the hardest part. Bringing in a diversity of opinion is a practice that requires constant attention and for which leaders can be coached.

Start a 60-day pilot of NumlyEngage™ to focus on improving dialogue, team, and development skills, including active listening, and giving powerful feedback.