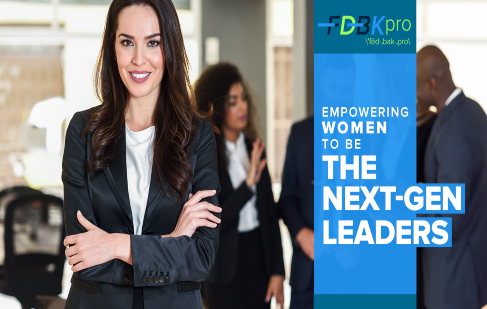 There is a growing body of evidence that supports having more women at decision−making tables. Considering the number of women graduating from college and entering the workforce, you would expect many to be advancing to senior positions in organizations. But the data shows a leaky pipeline ? there is a chasm between the number of women starting on the professional track and those advancing to leadership roles.

It is a fact that most professions are male-dominated. Building networks and defining the qualities of leadership strengths have been predominantly outlined by this demographic. However, the good news is that everyone today is waking up to the importance of diversity and the need to fix this leaky pipeline.

One good fix to leak-proof this pipeline is through mentoring the careers of women and helping them progress through this journey. With the right support at pivotal points, women can close knowledge gaps, broaden their perspectives, navigate organizational politics, and also build social capital. It is pretty much giving them the ammunition to help them ‘lean in’, as Sheryl Sandberg says. Because, female representation in your C-Suite is good for business.

Mentoring is even more essential to help women battle traditional stereotypes and prove that competency has nothing to do with gender. Despite the obvious benefits that mentoring brings, statistics reveal that only about 56% of women have access to senior leaders who act as mentors or advocates in their careers.

Men, on the contrary, find it easier to find advocacy in the workplace. This could simply be because there are more men in the C-Suite, and it is human nature to gravitate towards those who are like us.

Given this, we would assume that women would be aggressively pursuing mentors − but this is not happening. The question is, why?

A survey by DDI shows that “a staggering 63 percent of the survey group” never had a mentor, even though 67 percent of respondents ranked mentoring as important to career success. And as much as we’d like to believe that women do not seek mentorships because of competition, the truth is something else.

The real−world work environments are a far cry from the hyper-competitive work environments described in movies such as The Devil Wears Prada. Competition, according to this survey, was the least concern amongst women. Only 2% of the survey

responders felt that competition was a factor that would keep them from seeking mentors. However, for women, the lack of time to seek mentoring is the original impediment. Given the personal and professional dynamics, women feel that seeking mentorship means taking out time from their busy professional schedules or compromise on family time, domestic duties or caregiving and other personal commitments.

The black hole of perception

Perception is a powerful motivator. Women now want to be perceived for what they are − capable, knowledgeable, efficient, and ‘strong’ To prove that they are strong and capable, they often feel that seeking guidance will be perceived as a sign of weakness

Women manage so many aspects of their life, but the minute it comes to asking for guidance, they are reluctant to do so. Many believe that hard work and long hours will be enough for their career advancement. But hard work alone is not enough.

There is also the fear that it might be perceived that they are having an inappropriate relationship with their mentor. Though this can swing both ways, history suggests that this impacts women more than men. We do have the gender dynamics at play to blame here. Archaic mindsets question a woman‘s success raise or promotion and comfortably credit the virtue of their relationship and not the work she puts in.

And then there is the fear of rejection − that the mentor will not accept the woman as a mentee primarily because of their lack of social capital.

A research paper called Social Networks and Job Search Outcomes Among Male and Female Professional, Technical, and Managerial Workers tracked the census data of working men and women to understand how they network.

The research discovered that while both genders build networks, their compositions usually comprise of people of their own gender. While women tried to ensure that their network comprised of 50% women, men, on the other hand, made networks that hardly have any women. In the absence of strong mentoring programs, opportunities then remain in the exclusive boy’s club.

In the absence of strong mentoring programs that are private, secure, specific, results−oriented, accountable, and without judgment, women cannot reach the right mentor who can guide them to career success.

Given the current impetus on diversity, organizations thus should take a close look at their mentoring programs. They need to assess if they are really doing all that they can to identify high−potential women employees and determine how and where they need mentoring guidance. All this should be based on quantified data from self−assessments (16 personality skills assessment, behavioral skills assessment, etc.). Armed with this data, they should be provided a robust mentoring program that takes the discomfort out

of seeking mentoring and ultimately gets them into their leadership pipeline. Only then will we be able to create a diverse workforce and shatter the proverbial glass ceiling.

Get started with Numly’s 60-day pilot

If You Want to Win the War for Talent, You Must Train Your Managers to Lead