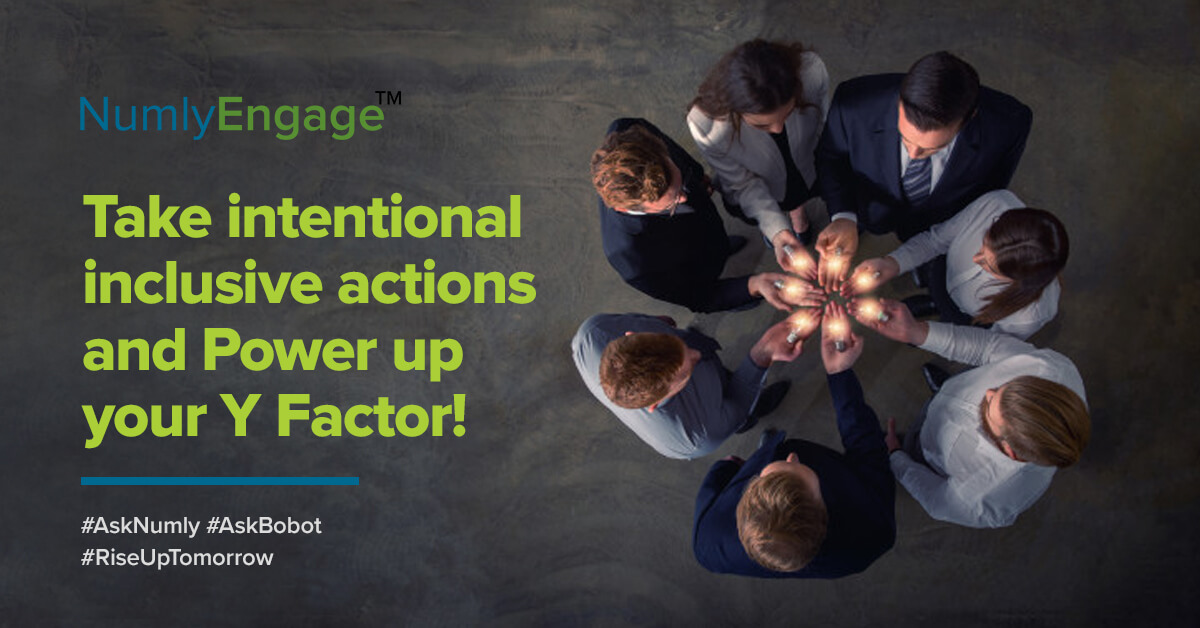 My very first recollection of the word “Allies” was back in middle school.  It was in a school debate in a Simulated United Nations Council as an inquisitive 12-year-old that I understood the true power of Allyship for nations. A simple meaning that I tacitly derived was a group of nations in helpful association, called treaties, with another group of nations. What I learnt in the process was that the power of “Allied” nations changes the course of how countries work with each other, in socio-political environments, influence economic growth and overcome the threat of war. All pretty darn good Super Powers I must say!

Being All-In with Allyship

Workplaces today across geographies, cultures, and economic and social influences are no less of a representation of a so called Simulated United Nations. The power in “Allyship” today to educate, unite, help and grow individuals goes way beyond in every macro level of personal and professional relationships. It is showing up and uplifting colleagues, mentees, friends, acquaintances of underrepresented groups in an empathic and educated way. We see more and more “Allyship” being a crucial part both inside and outside of our working institutions. Building a diverse and creative workplace is a flagship priority for enterprises to nurture all possible inclusive behaviors.

Diversity, Equity and Inclusion goes across professed and non-professed groups in terms of gender, race, and sexual orientation. Supporting people with accessibility needs, supporting women, supporting people of color, and supporting the LGBTQ community. Much less traversed but I would even include the “good guys” aka men who form strong allies and take intentional unbiased action towards diversity, inclusion and advocacy for these groups.

The Y factor for Women Leaders

In her acceptance speech, Vice President-elect Kamala Harris made a request of America’s children. “Because every little girl watching tonight sees that this is a country of possibilities, and to the children of our country, regardless of your gender, our country has sent you a clear message: Dream with ambition, lead with conviction and see yourselves in a way that others may not, simply because they’ve never seen it before.”

Per a Research Study from Penn Law we see a widespread pattern of how women face criticism and various detractors to their growth.

The effectual journey and success of Kamala Harris as the first woman of color, biracial Black-Indian woman being nominated by a major party for the vice presidency is a marker of major gender and racial progress in U.S. society. It is testimony to the fact that women of all backgrounds have accomplished important outcomes and many leadings despite hostile or biased workplace settings.

Allyship is a significant factor in successful culture change and build the mindset of grit and resilience in women in tech and in multiple male dominated industries. It’s a weighty catalyst that empowers women to hold their fort, rally their teams and drive change and growth for their respective organizations. Allyship leans in to the culture change, to create and maintain an inclusive environment. We NEED our Allied counterparts as trusted partners to ensure we are presented with equal opportunities and in turn erasing some of the factors as to why women are losing interest in certain careers such as STEM. Allyship can open doors, broaden networks and advocate for female emerging leaders.

Power up your Y Factors

In my quest for tapping into what makes Allyship work for women, here are the Y factor aka power skills that can transform women’s workplace and professional experiences.  In my earlier blog, I share what is the Y factor and how multiple women shared their transformation stories towards their growth and success.

Here are 5 ways you can take intentional inclusive actions and take advantage of allyship, form allies in systemic improvements and gaining the power skills to go with it.

To see your Allyship Building Skills in Action with the power of AI , take a look at NumlyEngage(™). Get a live demo today! 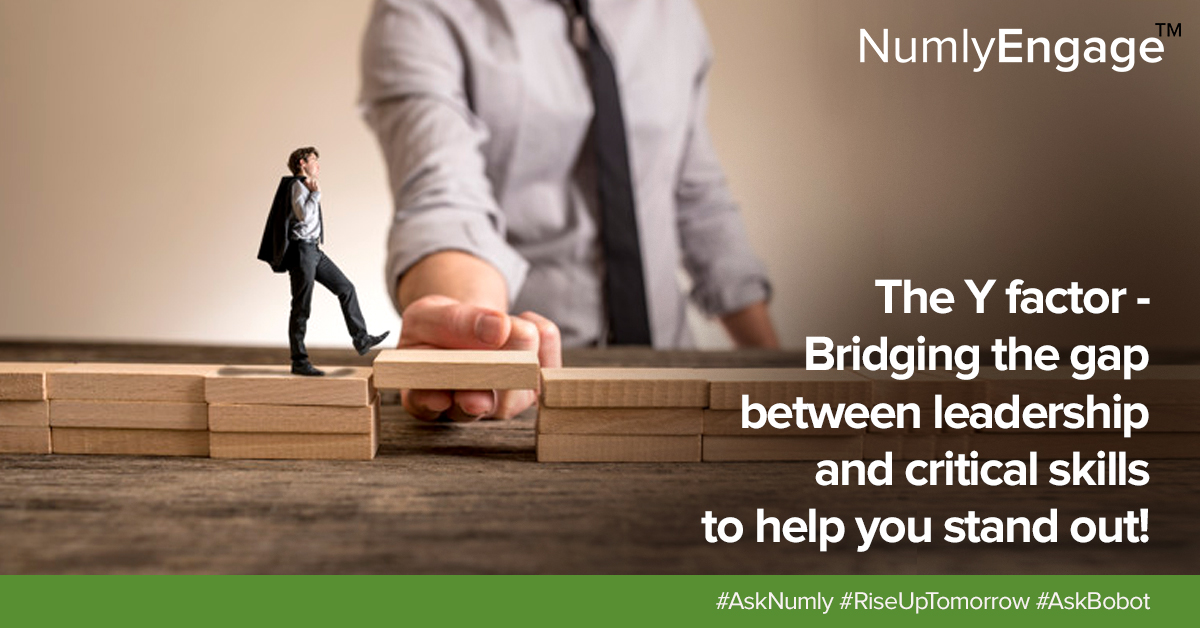 New hopes, new direction and profound changes! Heading into 2021, old ways will no longer hold ground for talent growth, retention and revenue growth for enterprises.  2020 has been a year of some of the most unprecedented times. An almost overnight crisis management in how we take care of ourselves, our enterprise employees and growth in business. Companies and Individuals need to reskill and upskill NOW to bridge the gap in this new era of WFH and engaging with remote teams or else they will perish.

Bridging the Leadership and the Soft Skills gap is what I call the Y factor!

“Soft skills are in the spotlight because they’re so hard to find in today’s potential employees”- Bruce Tulgan, a management consultant and author of “Bridging the Soft Skills Gap.”

A Gallup study shows that 75% feel of adults felt worried about the pandemic and its detrimental impact on mental health and wellness. However, 21% can be more productive and more engaged with the right coaching, help and support. This means more paradigm shifts for enterprises – the ability to adapt fast, attitude shifts and being nimble would be key for growth. Empowering People with Reskilling and Upskilling, addressing Employee Engagement and Network gaps, building strong Coaching-Mentoring Connections and powerful insights with AI powered Technologies will be key in the “Future of Work”. It is important to take women along and support them as they form a significant percentage of the workforce.

Role of Women and the Y factor

Women technologists and entrepreneurs can play a critical role in Engineering, Healthcare, Sales and Marketing, Education sectors and more. Women today can be more engaged, productive and grow into leaders by honing in on their Leadership and Soft Skills – their “Y Factor”.

This article shows that in 38 years, what changed in enterprises for women and decreased the wage gap were the Y factor soft skills such as negotiation, persuasion, and critical thinking that advanced their social skills. Companies are moving from top-down hierarchical approach to team-based structures, and as a result, individual evaluations are increasingly based on social skills, or how well someone works in a team, says Dale Cyphert, an associate professor of management at the University of Northern Iowa.

A calling to all Women and Men allies – Develop your Y factor, and Grow your Soft Skills

Earlier this year, I shared in my speakers session at a VMware organized event, a very important topic for working women. The topic and link contents are here – “Rising against all Odds, Climbing the Corporate Ladder” at Women Transforming Technology WT2, 2020 (11:20 minute mark).  It highlights their Y factor – their key soft skills in rising above and beyond from a myriad of adverse situations. Several powerful women from all walks of life and at different phases of their professional lives and careers shared how they faced obstacles in their careers, yet they succeeded despite all odds. How they have become an inspiration to others, they didn’t let obstacles stand in their way of becoming who they wanted to become.  They responded to a survey that highlighted the soft skills that made a profound difference to them: 1) Self Management and being Authentic, 2) Leading by example, being Accountable, 3) Problem Solving , 4) Getting Support and Collaborating, 5) Risk Taking

Here are 5 recommended ways you can be in control of your own destiny. Carve out a future that you always desired. Set  yourself to achieve your goals by organizing your professional and personal fronts with these key takeaways.

In conclusion, feel empowered to develop YOUR Y FACTOR Soft Skills heading into 2021 with New Hopes, New direction with these key takeaways! Companies and Individuals can now effectively reskill and upskill to bridge the gap in this new era of WFH and engaging with remote teams and nurture themselves and their businesses.